Few world travelers are as well-known as Marco Polo. Setting out from Venice at the age of seventeen, he made his way along the Silk Road to China, where he eventually met the great Kublai Khan. He went on to visit far-flung locales such as Mongolia, Persia, and Sri Lanka in twenty-four years of traveling.

Since that time, Marco Polo’s accounts of these wondrous journeys have become some of the most famous adventures in the history of the world. These works gave Europeans their first glimpse into life in the Far East and inspired many explorers, including Christopher Columbus himself. 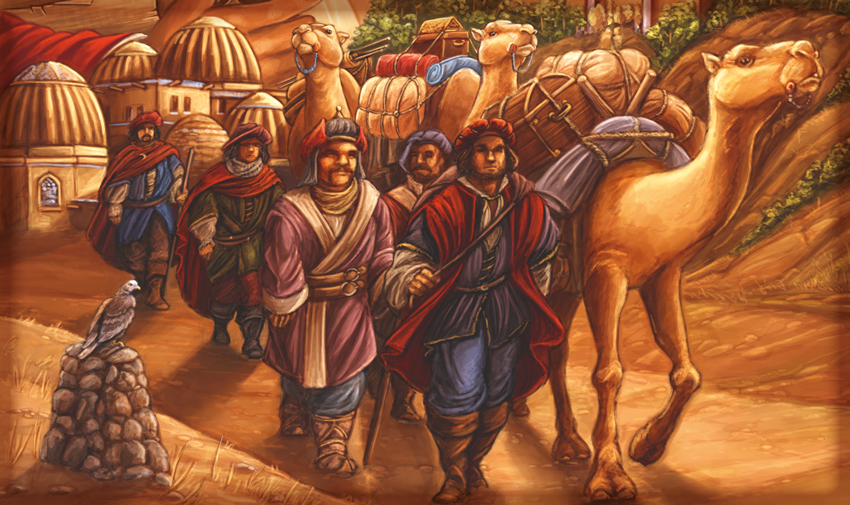 Although he is most well-known for his time on the Silk Road and the tales of his voyages, Marco Polo’s life after returning to his native Venice was no less exciting. He went on to become an influential merchant in the city and eventually funded more expeditions to the East.

When it was released in 2015, The Voyages of Marco Polo captured the spirit of Marco Polo’s adventures as players travel far and wide establishing trading posts and building their wealth. In 2018, the Agents of Venice expansion focuses on Polo’s return to Venice. The City of Venice module in particular gives you the opportunity to follow in Marco Polo’s footsteps and establish yourself as a Venetian merchant. In our announcement, we outlined the basics of navigating the competitive markets of thirteenth-century Venice. Today, we take a closer look at the path you’ll take to become the next Marco Polo.

During the thirteenth century, Venice was an important center of trade, commerce, and finance. Goods from silk to spices flowed through the city’s many palazzi, bringing with them immense amounts of wealth. In The City of Venice, six of these palazzi appear on a new board, promising new bonuses and new city actions to whoever can establish trading posts in them.

But gaining access to these palazzi is no easy task. Not just anyone is allowed in—only the most well-known traders can sell there. To sell in these lucrative palazzi, then, you must build your reputation and work your way up through the Venetian marketplaces. Beginning with the large palazzo at the bottom of the board, building a trading post in Venice opens the palazzi connected to where you just built.

Once this palazzo is open, even more options are available to you. Your path through Venice diverges and you must decide which direction to head. Each path leads to palazzi with unique city cards and bonus tiles, but some connections require you to pay to use them. Ultimately, it’s up to you to determine your own path through the twisting streets and canals of Venice.

The Toast of Venice

In addition to opening up Marco Polo’s hometown, the Venice board creates an intriguing new place for you to place your dice during a game of The Voyages of Marco Polo. Unlike the cities on the base game board, you don’t need to have a figure in Venice to build trading posts in the palazzi there. Instead, the Venice board has a new action space that operates similarly to the Khan’s Favor space in the base game. Just like the Khan’s Favor, you must place a die with a value equal to or greater than the most recently-placed die in order on the action space.

This constant presence in Venice allows you to commit dice to constructing trading posts in the city every round. With the number of action spaces available limited by the number of players, though, you must compete with other players for a chance to grow your network. Not only does making a name for yourself in Venice unlock the benefits the palazzi provide, it can also directly help your score. If you build your reputation enough, several palazzi will reward you with victory points when you construct trading posts in them. 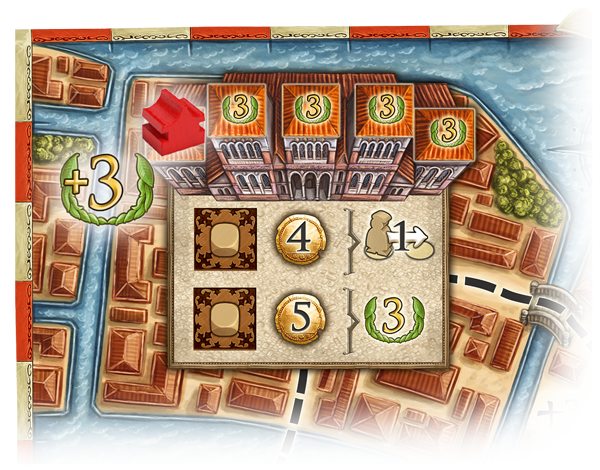 With action spaces in Venice at a premium, you’ll have to devise clever ways to claim spaces in the city as quickly as you can while keeping the competition out. Placing a high value die in the Venice action space early in a round is a good way to make things difficult for your opponents, but, if you’re playing with the Companions module included with Agents of Venice, there’s another option. You could claim the Gondolier companion and spend another die to place a trading post in Venice.

This means you could potentially build two trading posts in Venice in a single round, but the more dice you commit to Venice, the fewer you have for other actions. Only a true merchant will be able to determine the best way to use their dice to secure victory.

Write Your Own Story

After twenty-four years on the Silk Road, Venice must have looked like a completely new city to Marco Polo. Despite this, he recognized the great opportunity the city held for traders able to sell at the palazzi of the noble families. Explore the possibilities of this historic city in the Agents of Venice expansion!

Return to the Venice and become a master trader. The Agents of Venice Expansion is set to be released in early 2018. Head to your local retailer to pre-order your copy today, or you can place your pre-order through Z-Man Games here.