On the Silk Road

Preview the new characters of the Agents of Venice expansion

No one person makes history on their own. Every great leader, inventor, and explorer has had a supporting cast that has helped them become remembered forever. These supporting players may not be as well-remembered, but they still deserve credit for aiding in these great accomplishments.

Marco Polo is one such example. He may be famous for his travels throughout Asia, but in reality, many people helped make these journeys happen. Fittingly, in The Voyages of Marco Polo, Marco is just one of a large and eclectic cast of characters players can control each game. Each of these characters is utterly unique with abilities that let players bend or break the rules of the game in their favor. From Raschid ad-Din Sinan choosing the values on his dice whenever he takes an action to Matteo Polo receiving an extra die and contract at the beginning of each round, these are potent abilities that have become one of the defining features of the game. 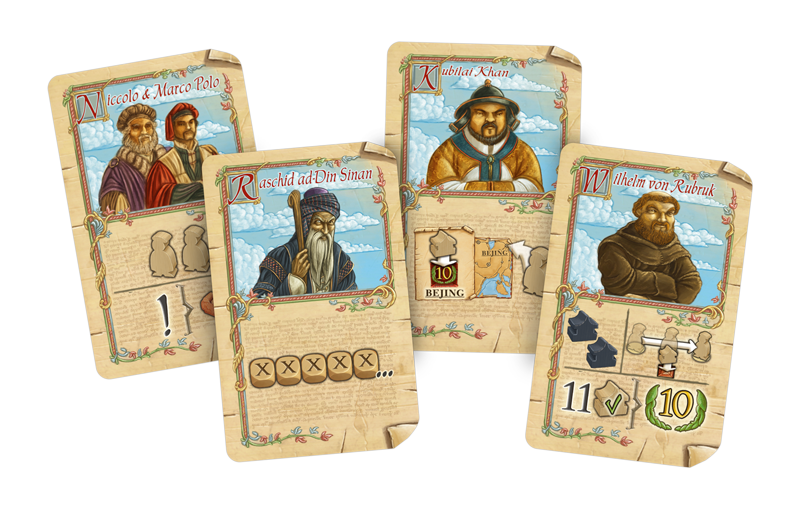 When it releases in a few weeks, the Agents of Venice expansion adds five more characters to this ever-growing cast, opening up even more completely new ways of playing the game. Today we’ll take a closer look at two of these characters and their game-altering abilities.

Although the stories of fantastic journeys to the East are credited to Marco Polo alone, many members of the Polo family traveled the Silk Road. Marco’s father Niccolo and uncle Matteo achieved great wealth as merchants in Constantinople and Asia long before Marco had ever left Venice. They introduced Marco to the business and swept him off on the journey that would be remembered for centuries to come. 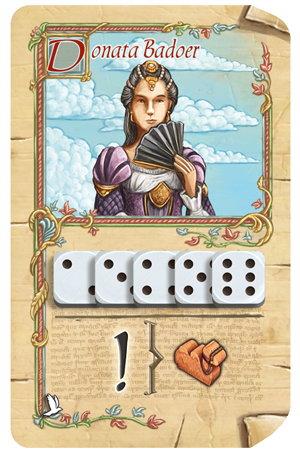 Despite experiencing a lifetime’s worth of wonders during his journeys, Marco Polo sought a rather normal life when he returned home to Venice. He settled down around 1300, married Donata Bodoer, and had three daughters with her. Keeping with Agents of Venice’s focus on the years after Marco returned from his travels, both Donata Badoer and their daughters Bellela, Fantina, and Moreta appear as playable characters in the expansion.

As the daughter and wife of prominent Venetian merchants, Donata Badoer has plenty of connections of her own that she can make use of. Not only do these connections help her gain a camel at the beginning of each round, they also make her a flexible character capable of hatching long-term plans. 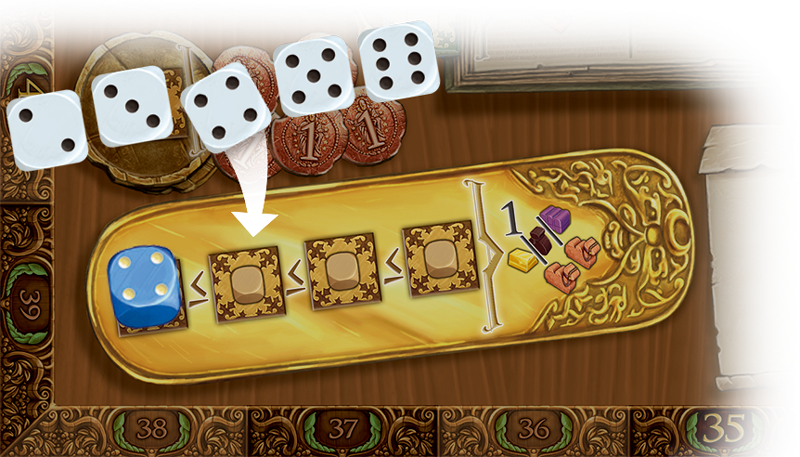 Donata Badoer's die tokens give players the freedom to choose when to take actions such as seeking the Khan's favor.

She begins the game with five die tokens numbered two through six and must use exactly one token each round. The tokens can be used on their own or in combination with dice, opening up all sorts of possibilities. Having these dice with fixed values removes much of the uncertainty from each round, allowing the player controlling Donata Badoer to use them exactly when they need them to travel, collect goods from the bazaar, seek the Khan’s Favor, or take any other actions. With Donata Badoer, then, players can methodically plan out their turns and create the right combinations of tokens and dice at just the right time.

The Silk Road is long, costly to travel, and is divided into distinct routes that can be hard to navigate between. What’s more, the road to Beijing is paved with cities that provide many benefits to the travelers who reach them. On top of the additional actions and city bonuses players unlock by establishing trading posts, large cities contain outpost tokens that reward the first player to reach their gates. Beginning the game in Venice, players must race to claim the best outpost tokens and gain access to city actions and bonuses as early as possible. 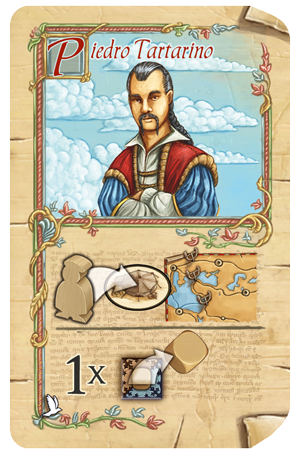 With Piedro Tartarino, however, this becomes less of a problem. The player controlling this character has the option of beginning the game in one of three oases instead of Venice. In addition to giving them a head start in the race to Beijing, this also means this player can position themselves along the route that best fits their strategy. From here, they can quickly snatch up any outpost bonuses in their path long before the other players have time to catch up.

Being able to choose a starting location is powerful, but Piedro Tartarino’s abilities extend beyond the beginning of the game. Once per round, the Piedro Tartarino player can also remove all dice from an action space and replace them with dice of their own. This means that, while other players see their options dwindle as a round progresses, this player has no such worry. Until they use Pedro Tartarino's ability, all possible action spaces are in play.

Late in the round, the player controlling Piedro Tartarino removes all the dice from the travel space, allowing them to travel without paying extra costs and putting them in line to be the first player during the next round!

This ability opens up all sorts of intriguing strategies. For example, with Piedro Tartarino it's possible to wait until late in a round to remove all the dice from the travel spaces, allowing him to travel without having to pay the extra costs incurred by choosing an already occupied space. As they would be traveling so late in the round, this also puts them in prime position to become the first player during the next round and have their choice of action spaces!

Write Your Own History

The name Marco Polo may be etched in history books, but many traveled the Silk Road in search of fortune. Strike out and build your own legacy!

Return to the Venice and become a master trader. The Agents of Venice Expansion is set to be released in February. Head to your local retailer to pre-order your copy today, or you can place your pre-order through Z-Man Games here.