Discover new ways to become the greatest of all Vikings 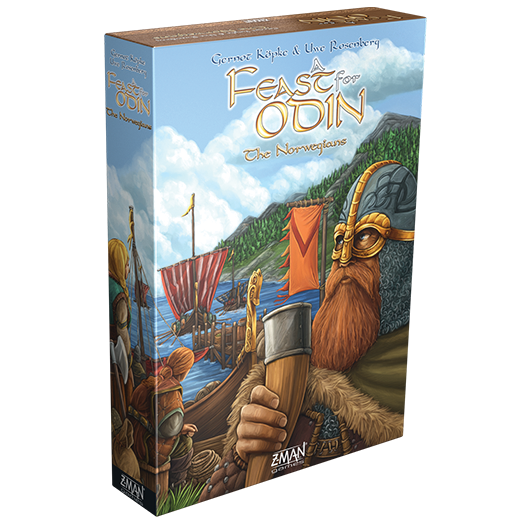 Order The Norwegians at your local retailer or on our website today!

In the realms of crafting, trade, discover, and battle, you have already proven yourself a worthy chieftain. Now it’s time to broaden your horizons, to explore and tame new lands, and to bring further wealth and glory to your tribe.

The first expansion to the acclaimed A Feast For Odin, The Norwegians presents players with new challenges as they seek to prove themselves against their fellow chieftans.

Living along the rugged coast of Scandinavia, your Vikings excel at making do with what’s available to them, extracting what resources they can from the land and supplanting their crops when the harvest fails. Replacing the action board and extensions from the base game, the three new double-sided action boards in The Norwegians combine to create a varying tableau of options for different player counts, forcing you to adjust your strategy to seek new paths to victory.

At the two player count, players will find their options constrained and face more competition for some of the most coveted actions spaces, like Pillaging. If your opponent claims the chance to lead a Pillaging raid before you, perhaps you might choose a subtler route and take a knarr out for some Theft. Your weapons more commonly used for hunting can be just as useful for thievery, and your knarr can allow you to barter your goods, opening up new paths.

With only one game hunt available on the board, you might seek to claim the hunt before your opponent, taking home a lesser hide than setting a snare but still bringing back much meat for your evening feast. Or you may choose to range further afield to claim the antlers of an elk, as well as a new weapon for your future endeavors. Heading out further for hunting and claiming that space in the new fifth column is a tempting choice but will end your round. After placing Vikings on action spaces in the fifth column, you cannot plance any more Vikings that round and must pass. So, consider carefully when you send your Vikings out and to which task.

More options unfold with three players, with flourishing trade giving you more options to add to your hoard, while new horizons for both exploration and pillage greet your ships. Finally, with all four players, animals to hunt become more readily available, both on land and sea, and more players can take advantage of their skilled crafters to build warm houses and sturdy ships.

Among your people are many skilled crafters, but they will need lodgings, tools, and supplies to properly utilize their talents for the benefit of the clan. At the beginning of the game, each player will be dealt a double-sided artisan shed. You can build either side of the artisan shed during the game, instead of building a normal shed. Once built, it will need to be stocked not only with the food and goods of a standard building, but with each artisan’s preferred materials and tools.

The armory, for instance, will require ore for the forge, while the whaling hut will need a whaling boat to reach its full potential. Once they are up and running, the artisans can provide you with unique rewards: the armory will not only forge new swords for you, but can also provide you with excess ore to arm your longships or create new tools. Meanwhile, the whaling hut gives you their excess catch in the form of stockfish for the table.

These new opportunities can help direct your strategy throughout the game. Utilizing new goods and puzzling them into place on your unique board can give you an edge over your opponents. Here the player starting with the beekeeper is able to place the new pig goods tile onto the board. The pig surrounds the mead icon, activating that bonus and giving that player a new good tile. The beekeeper can make an excellent honey mead and placing the new mead tile onto the board gets rid of the negative two points.

Occupation cards are an important facet of your strategy: having a Grain Merchant or Berserker among your clan can make a major difference in your strategy throughout the game. However, sometimes a newly-drawn occupation card may not correspond with a plan you’ve already adopted for this game, or you may have drawn it just a bit too late. While before you might have played them and possibly claimed some small recompense in the form of their printed points values, now you can take a more substantial reward in the form of the new victory point tokens.

With the Norwegians expansion, whenever you could play an occupation card, you can instead discard that card to take a victory point token, which are worth either 2, 3, or 4 points at the end of the game. There are a limited number of 3- and 4-value victory point tokens available, so those who take them early will benefit the most, but you always have the option to discard an occupation for a solid 2 points.

Grab your copy of A Feast for Odin: The Norwegians today to become the greatest Viking chieftain!