Travel back in time for game night

Whether it's building a medieval city in France, stopping the fall of Rome, or waging battles through historical epochs, we've got lots of options for games with a more historical setting for the history fan in your life. 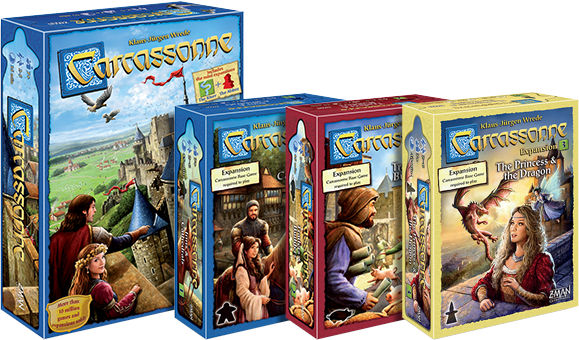 Inspired by the medieval fortress in southern France of the same name, Carcassonne is a tile-laying game in which players fill in the countryside around the fortified city. Players choose from tiles that depict cities, roads, monasteries, and fields; each new tile placed creates an ever-expanding board on which players can then add their followers. Players score points by having followers on features as they're completed.

With lots of expansions and other standalone titles in the Carcassonne family, you'll find hours of gameplay. 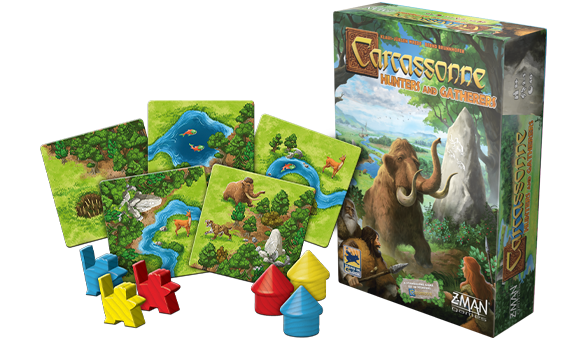 Thousands of years before the people of Carcassonne built mighty walls and castles, their ancestors roamed the land, hunting, fishing, and gathering what they needed to survive. Carcassonne: Hunters & Gatherers combines the classic tile-laying gameplay of the original Carcassonne with new thematic features and adjusted scoring rules for an all-new challenge. 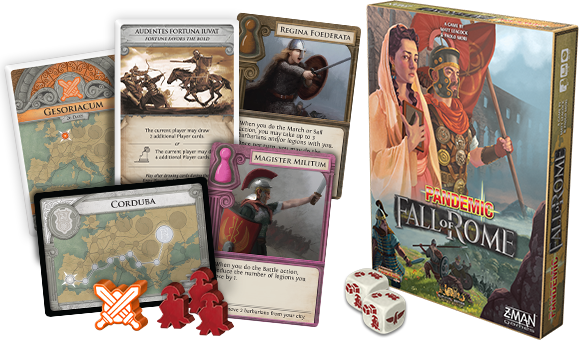 Combining the cooperative gameplay of Pandemic with innovative new mechanics, Pandemic: Fall of Rome takes players back in history to the time of the world’s greatest empire: Rome. A weakened military has left the borders open to invasion from countless tribes such as the Anglo-Saxons, Goths, Vandals, and Huns.

As you march through the Roman Empire, you must recruit armies, fortify cities, forge alliances, and face off against the invading hordes in battle. Take on unique roles with special abilities to improve your team’s chances to protect against the invaders. Work together, use your skills wisely, and stop the fall of Rome. 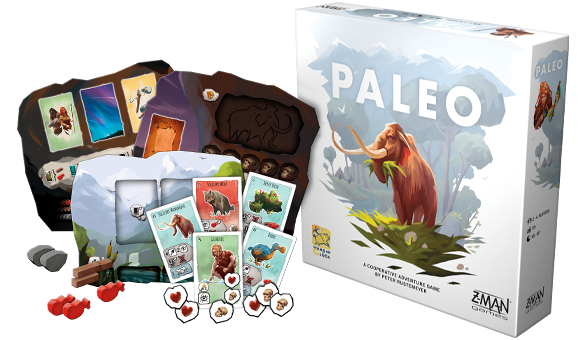 Return to the stone age in a new cooperative adventure! Paleo is a survival strategy game for 2–4 players. Take on the roles of a prehistoric people filled with fierce warriors, clever inventors, and watchful scouts. Only by working together can you survive to explore the surroundings and undertake the ultimate paleolithic quest: completing a cave painting.

Try the game on Tabletopia here: https://tabletopia.com/games/paleo then grab your copy for the holidays! 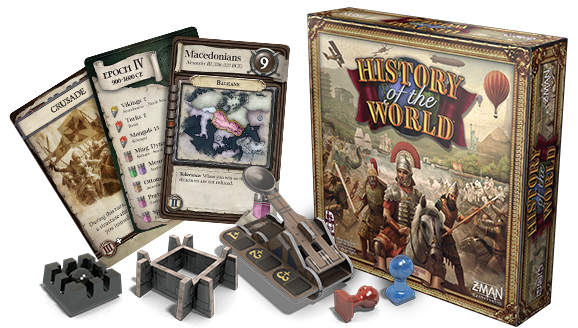 History of the World

History of the World is a game of epic conquest set amid the rise and fall of mighty empires. Each game spans the dawn of civilization to the twentieth century as you take command of historical civilizations and spread your influence across the globe. The more territories you claim, the more points you’ll score, but you’ll have to drive your rivals out if you want to build the largest empire. 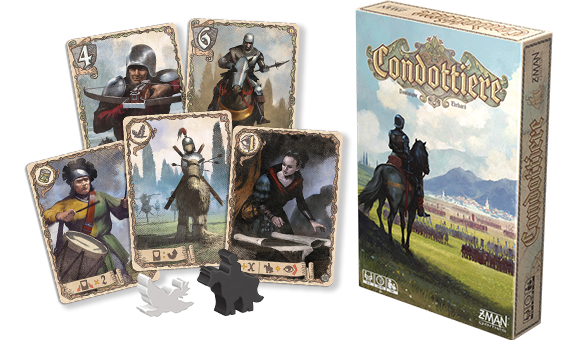 Use the Condottieri, ambitious mercenary leaders, to strategically fight for control of desirable regions in Italy in this classic card game. Only the strongest can win the battle. From the lowly foot soldier with a strength of 1 to the booming canon with a strength of 10, the mercenary cards form the backbone of your army. Strategically choose which mercenaries to send out to the field to match your opponents’ strength. Think ahead and play the special effect cards at the right point in the battle to turn the tide in your favor. 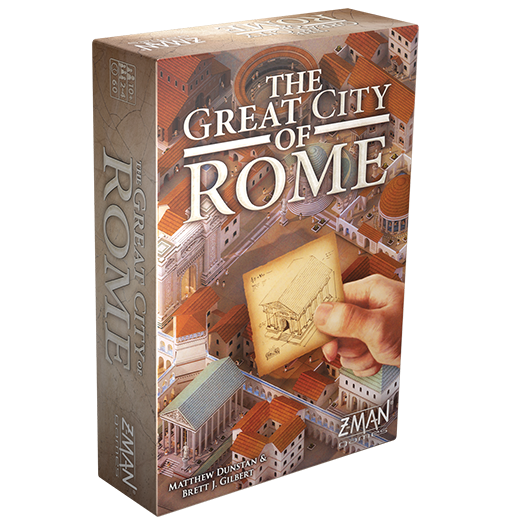 The Great City of Rome

The Roman Emperor has summoned the world’s finest architects to rebuild the Eternal City, but only one plan will be realized in brick and marble. The construction of a city is a complex endeavor, requiring meticulous planning, dedicated workers, and sturdy materials. Before building can start, players must travel to the Emperor's court and use emissaries to get blueprints and materials. Then you must carefully arrange the different buildings to maximize the satisfaction of its denizens and assure your legacy. 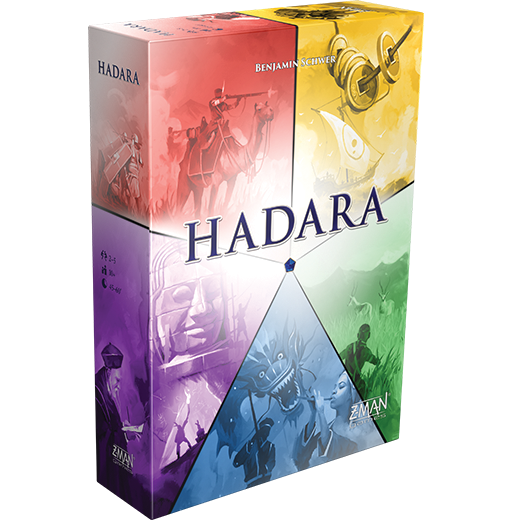 It's your chance to make history! Over three epochs, guide the growth of your civilization as new ideas emerge; take great strides forward in the many fields of human achievement to build an empire more glorious than any other! Skilled artisans, philosophers, warriors, and architects from different cultures will bring their genius to aid you in your endeavors, but it rests with you to choose the best allies to build your strength and prestige. 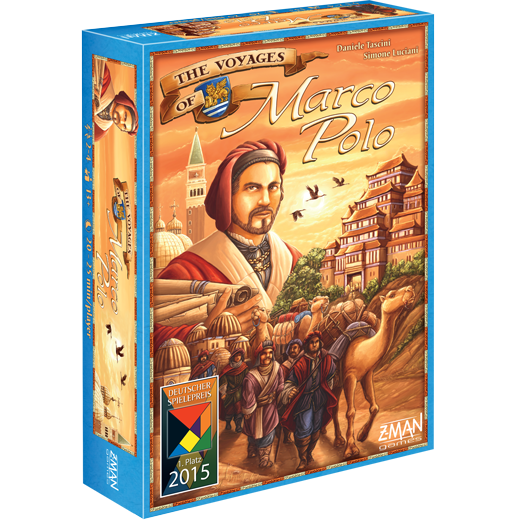 The Voyages of Marco Polo

Embark on a voyage of discovery and trade as you retrace the steps of one of the world’s most famous travelers. At the end of the 13th Century, the Venetian merchants Niccolo and Matteo Polo set off on their second voyage to the East. Joining them is Niccolo’s young son, Marco. The journey will take the Polos across land and sea, through deserts and over mountains. In The Voyages of Marco Polo, players accompany the Polos on this journey, helping them earn money by fulfilling contracts. With shifting goals, special character abilities, and a unique dice mechanic, you'll need to rise to the challenge to claim your spot in history.