Preview new and updated features in Marco Polo II: In the Service of the Khan

Since its release in 2015, The Voyages of Marco Polo has been drawing players to the Silk Road to further Marco Polo’s legacy. Now, return to the Mongol Empire in the khan’s employ to continue that mission! While based on the original Marco Polo mechanics—placing dice, taking actions, and completing contracts—Marco Polo II: In the Service of the Khan is an epic standalone follow-up to the beloved The Voyages of Marco Polo, complete with new characters, components, actions and more.

Life on the Silk Road

In every game of Marco Polo II, players set out from Beijing to seek their fortune throughout the vast territory of the Great Khan. Like in the original game, each turn involves placing dice to take actions, including acquiring goods and camels to pay costs and complete contracts, traveling from city to city establishing trading posts, and seeking the favor of the khan himself. But some new actions will vary, creating a whole new challenge as you forge your path along the Silk Road.

For instance, rather than the Grand Bazaar, players can use the action spaces on the Books to take offers of goods and camels. While some available offers will stay the same from round to round, some will reset with new offers, adding a level of variability that changes with the marketplace. Shrewd merchants will take advantage of offers while they can and be prepared to adapt to a new market landscape the next time they come seeking goods and camels.

Marco Polo II also introduces jade, a brand-new good that adds a layer of flexibility to players’ mercantile pursuits. In addition to its usefulness for completing contracts, jade can be used in lieu of camels and coins to pay costs, such as those needed to travel around the board.

Indeed, travel will be even more lucrative for merchants in the game, as they will have to establish themselves in new cities to take contracts. While in The Voyages of Marco Polo, players could take contracts as a general action, in Marco Polo II, contracts are tied to different cities throughout the Mongol Empire. In order to take a new one, players must have placed a trading post in a city that has contracts available. More trading posts around the board is equally useful for using each city’s special action space, so travel widely, just as Marco Polo would have done!

While the Great Khan has sent you on your mission, his aren’t the only credentials that matter on the road. Marco Polo II also introduces guild seals, a new component important for both trade and travel.

There are four different guilds open to each player for membership: the farmer’s, tailor’s, spicer’s, and jeweler’s guilds. Each player can only take one seal of each type, but once they have them, new avenues appear. Certain routes around the empire will require you to have specific guild seals before you can embark down those paths, making them lucrative investments for more exclusive trading opportunities. Guild seals can also be upgraded for additional round bonuses and end-game points, so they should be of weighty consideration for the enterprising merchant. 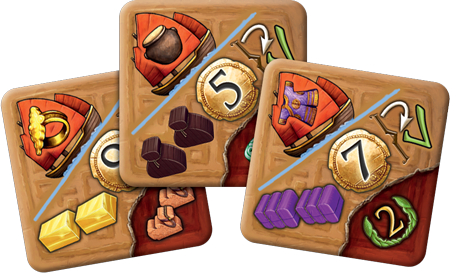 But for those merchants not yet established, there are still options. While players must establish trading posts in most cities on the board to use those locations’ action spaces, a new feature of Marco Polo II is that two city cards are available to use without having placed any trading posts. They change from round to round and can be a useful option for players who have yet to venture very far from Beijing.

With new and changing options for actions in any given round, there are ample opportunities for meaningful choices. That said, you’ll have to move decisively to take advantages of certain actions, because some spaces are limited. Once a player has placed a die on a spot, no one else can use it, so be sure to act quickly to successfully execute your plans.

And, when it comes to the weighing of these merchants, final scoring works a little differently. Each player has only one goal card instead of two, and they must take account of their guild seals and rewards for visiting different cities, in addition to some other sources of points. Only the most acclaimed merchant will win!

How will you write your legacy of wealth and fame? Preorder now and embark on a new voyage when Marco Polo II: In the Service of the Khan releases later this year!