Within the World of Warcraft® universe, quests are essential to progression and success, and the march against the Lich King is no different. The evil he has awoken and uses to defend his reign must be defeated, and taking on quests is the only way to do so.

In World of Warcraft: Wrath of the Lich King - A Pandemic System Board Game, quests are a unique mechanic that utilize hero cards and teamwork in order to progress in your mission to end the undead scourge. Quests represent the major threats around Northrend, and must be dealt with in order to access the final battle with the Lich King, himself. 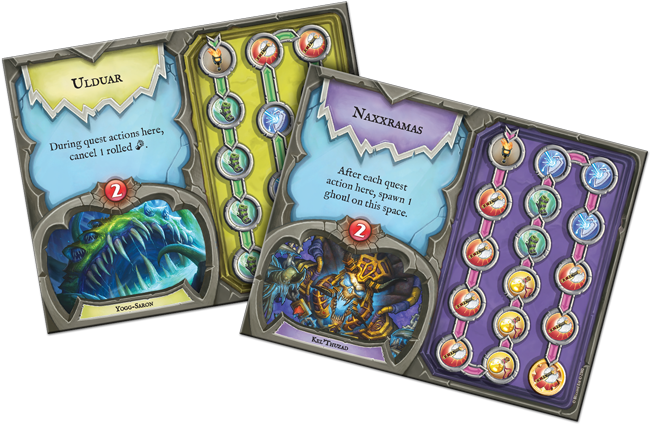 In total, there are 10 quests to choose from, including the final one in Icecrown Citadel. Each quest has its own quest sheet that shows what evil threat the players must contend with, how to go about completing it, and how much health they are risking every action they attempt to complete it. However, a single game will only utilize three normal quests and the Icecrown Citadel quest.

Quests are denoted by the familiar yellow mission marker, making that specific space a quest space. At the start of the game, players will randomly place three quest sheets, one in each region, in the specified space, which corresponds to the space on the board with the quest marker.

To complete quests, players must take the Quest Action to use hero cards that correspond to the symbols on the track shown on the quest sheet. Other players on the same quest space can also add their cards to the mix. A quest is completed when the progress marker reaches the final space of the track.

When all three quests are complete, players can lay siege to Icecrown and confront the Lich King inside. If they manage to defeat him, the game is won. 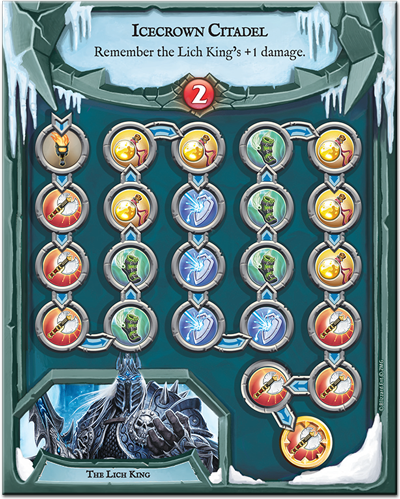 Like the other quests, this one requires hero cards to progress the quest tracker, and players will take damage every time they attempt the quest. However, players are facing the Lich King this time. Showing his terrible power, he deals an extra point of damage to all who are engaged in the quest. As always, teamwork is essential for defeating him and making it out in one piece.

Do you have what it takes to complete the quests and storm Icecrown Citadel? Find out by ordering World of Warcraft: Wrath of the Lich King - A Pandemic System Board from your local game store or online.