Confront the Lich King as your favorite hero from Azeroth

Few could hope to survive the ferocity of the Lich King’s might, the vast army of his undead Scourge, and the powers of the ancient evil he has bent to his will. The only ones that would stand a chance are the legendary heroes from all across Azeroth. As they embark on their trek across Northrend, each player takes control of one of the heroes from the World of Warcraft universe. Together, they must use their unique abilities to complete quests, defeat the undead, and eliminate the Lich King once and for all. 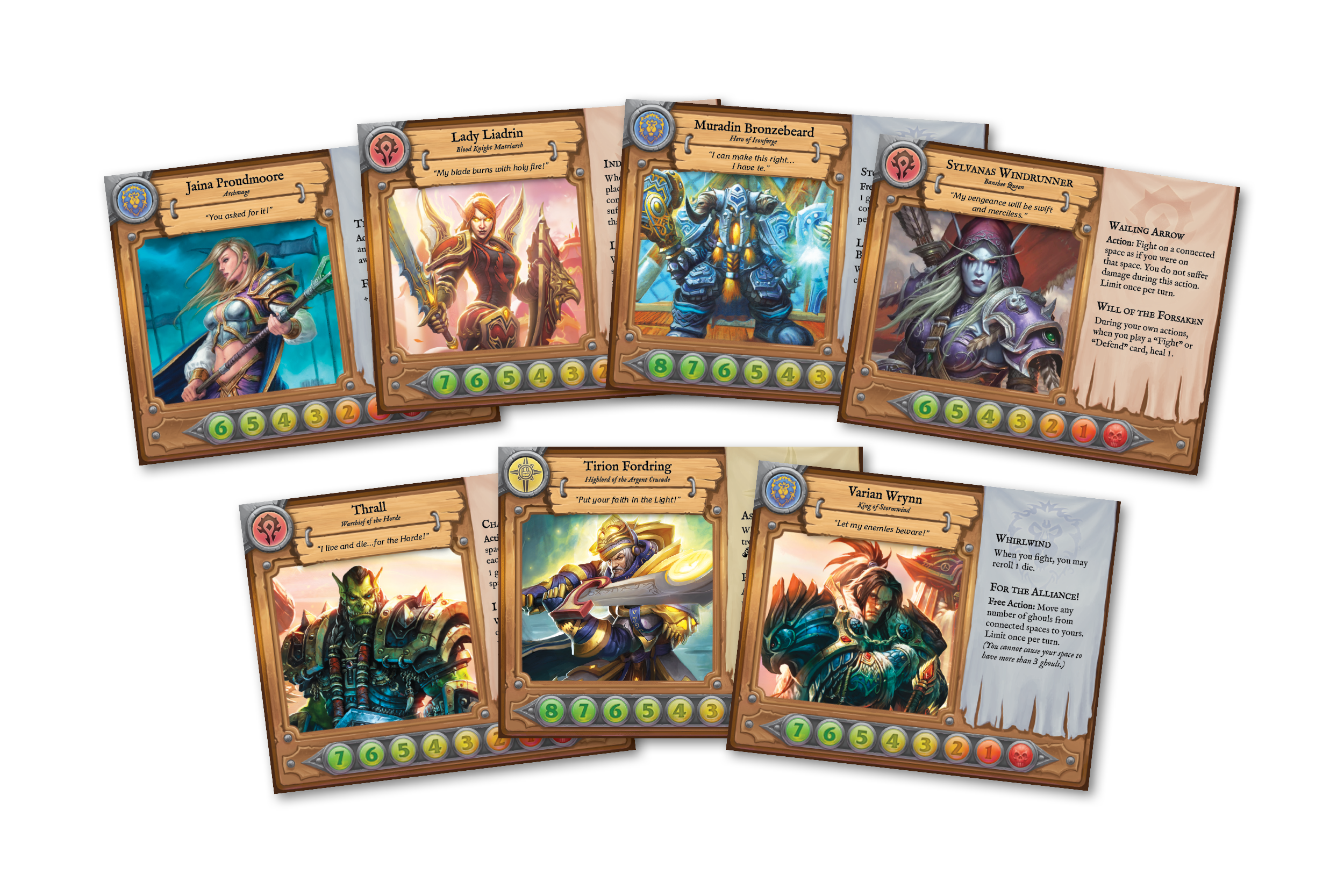 From the Horde, the Alliance, and beyond, players choose to play as Jaina Proudmoore, Lady Liadrin, Muradin Bronzebeard, Tirion Fordring, Sylvanas Windrunner, Thrall, or Varian Wrynn. Each character comes with a corresponding hero sheet that details their two unique abilities and allows you to keep track of their health on the front, while giving a brief description of the character and showing their starting space on the back. With each character having different abilities, players will be able to switch up their strategy each time they play. 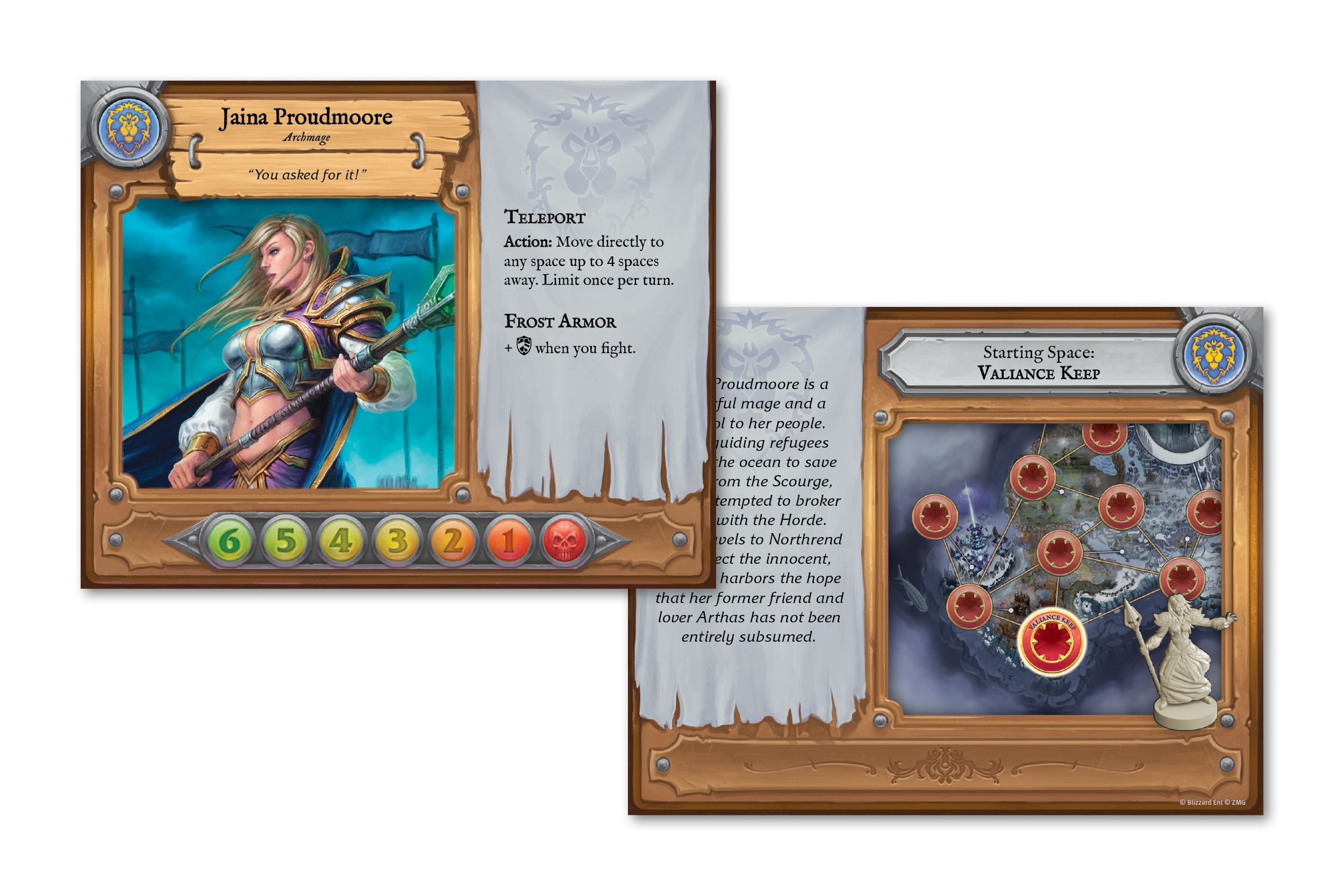 One of the most powerful mages in all of Azeroth, Jaina Proudmoore has ventured to Northrend in hopes of defeating the Scourge and in saving whatever piece of her former friend and lover, Arthas, she can.

Jaina’s mastery of arcane magic lends players a hand in both transportation and in staying alive. Her Teleportation ability allows her to move to any space up to four spaces away once a turn, while her Frost Armor gives her one extra defense when she takes the fight action, helping her to avoid more damage when fighting against the ghouls and abominations. 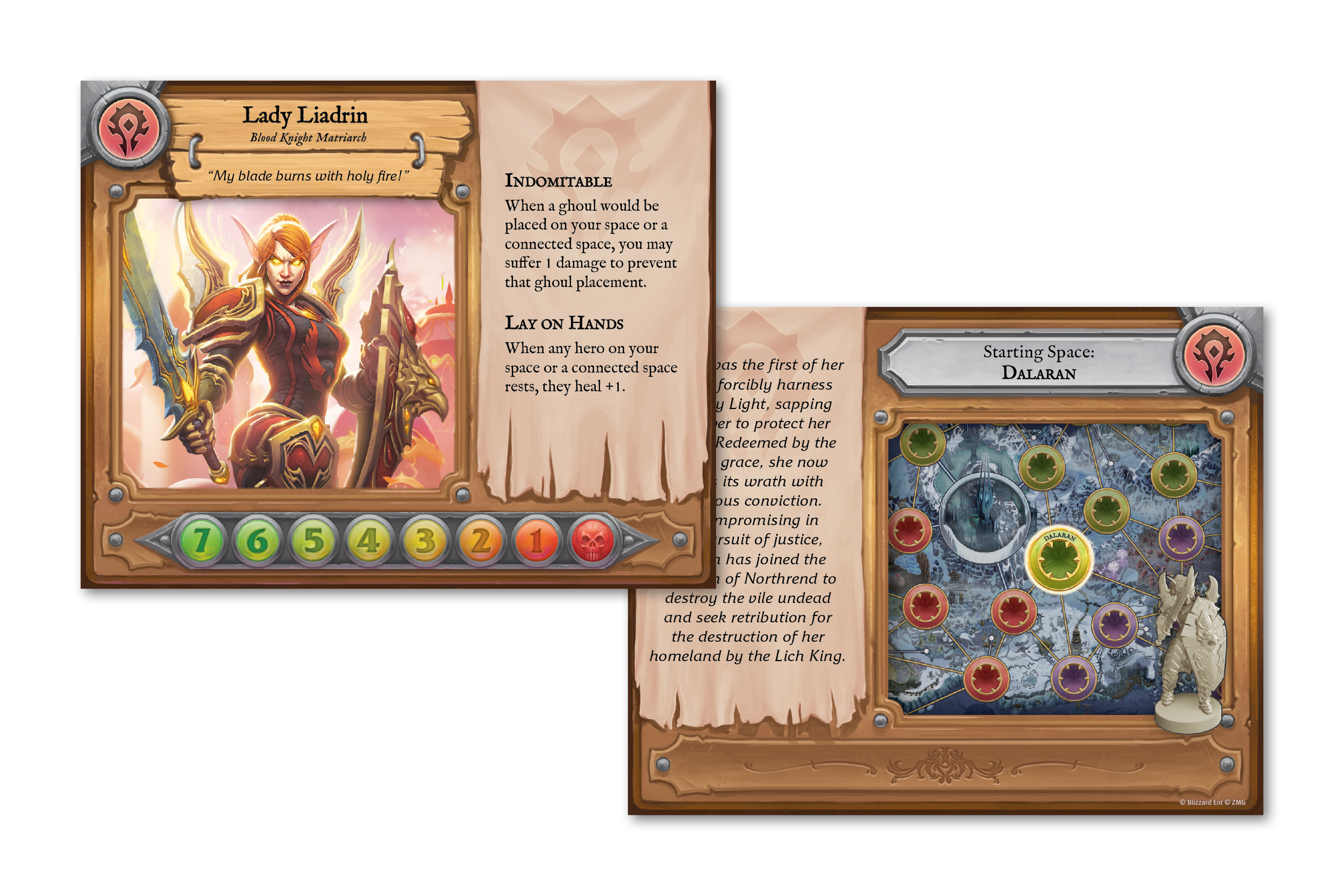 Mighty enough to forcibly harness the power of the Holy Light, Lady Liadrin has joined the invasion of Northrend to bring an end to the undead Scourge with her own brand of uncompromising justice.

Through her paladin abilities, she can help keep the undead numbers under control, and also keep fellow heroes from falling to injury. Her Indomitable ability allows her to prevent a ghoul from being placed on her space or a connecting space if she suffers 1 damage instead. Her Lay on Hands ability allows any hero on her space or a connected space to heal an extra damage when they take the rest action. 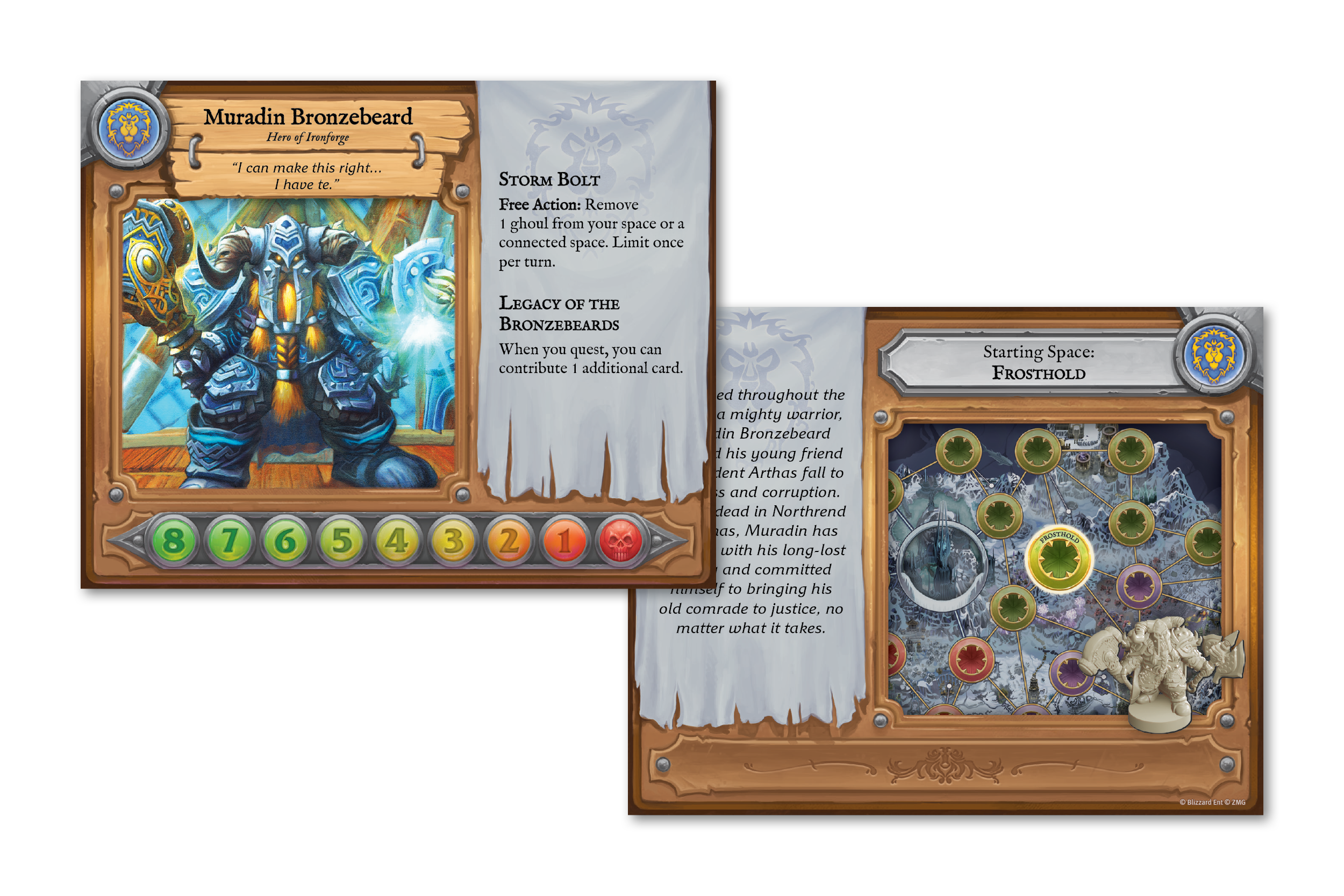 The renowned Muradin Bronzebeard watched his friend and student Prince Arthas fall prey to the lure of Frostmourne, and was left for dead in the frozen land of Northrend. Now, he has returned to bring his old comrade to justice.

Utilizing abilities that allow him to control enemy numbers up close or at range, and to assist in questing, Muradin is a valuable ally in the fight against the Lich King. His Storm Bolt deals 1 damage to a ghoul from his space or a connected space once per turn, while his Legacy of the Bronzebeards allows him to contribute 1 additional card to questing, as opposed to the standard single card. 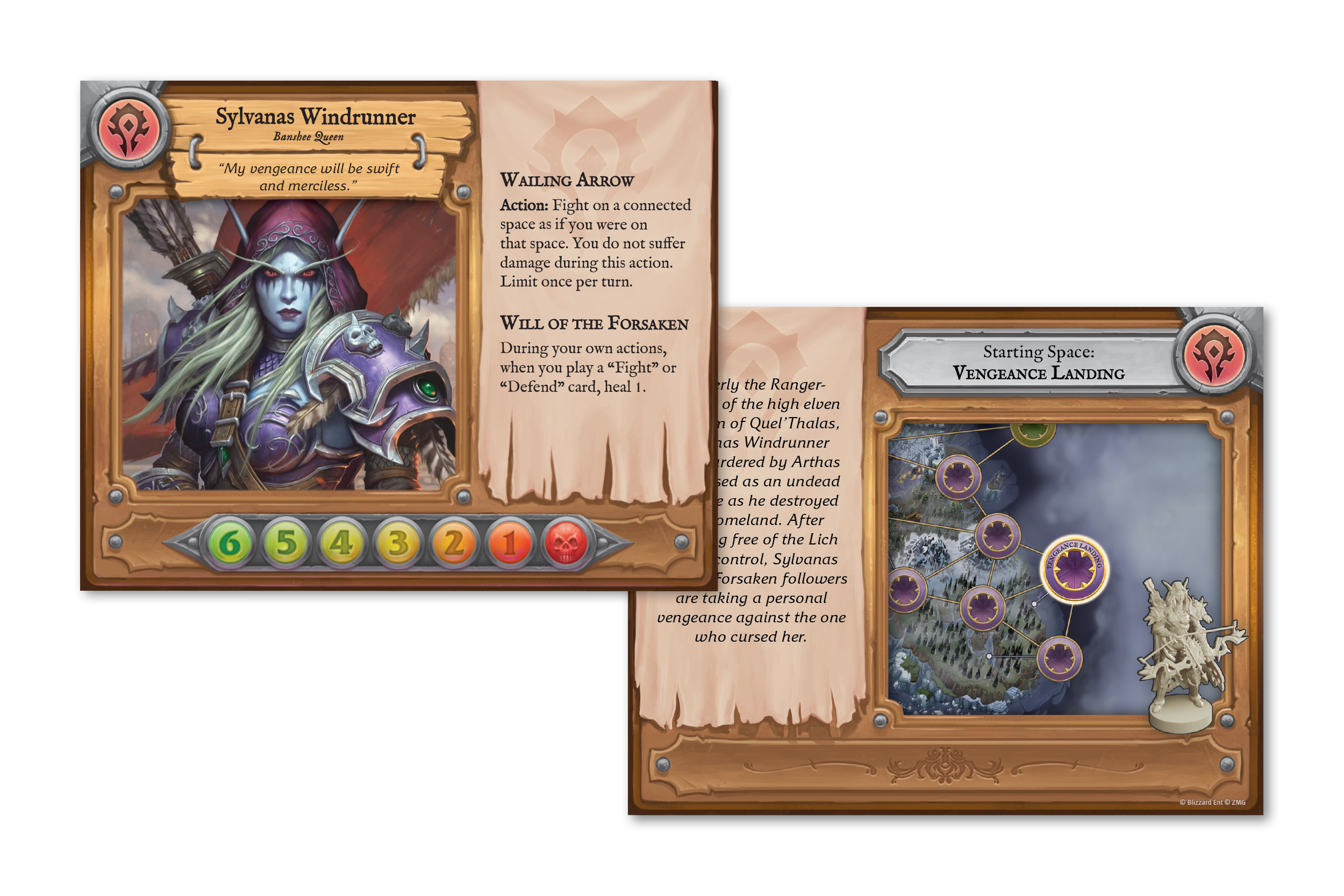 Once a Ranger-General of Silvermoon, Sylvanas Windrunner was killed and twisted by Arthas into the Banshee Queen. Now, free of his will, and leader of the undead Forsaken, she vows vengeance against the Lich King for what he did to her.

Sylvanas is all about fighting at long range and using her undead constitution to lessen the damage she takes in battle. Her Wailing Arrow allows her to fight on a connected space as if she was on that space once a turn, but she doesn’t take damage from the fight. Her Will of the Forsaken ability allows her to heal 1 damage when she plays a fight or defend card.

Once a Ranger-General of Silvermoon, Sylvanas Windrunner was killed and twisted by Arthas into the Banshee Queen. Now, free of his will, and leader of the undead Forsaken, she vows vengeance against the Lich King for what he did to her.

Sylvanas is all about fighting at long range and using her undead constitution to lessen the damage she takes in battle. Her Wailing Arrow allows her to fight on a connected space as if she was on that space once a turn, but she doesn’t take damage from the fight. Her Will of the Forsaken ability allows her to heal 1 damage when she plays a fight or defend card. 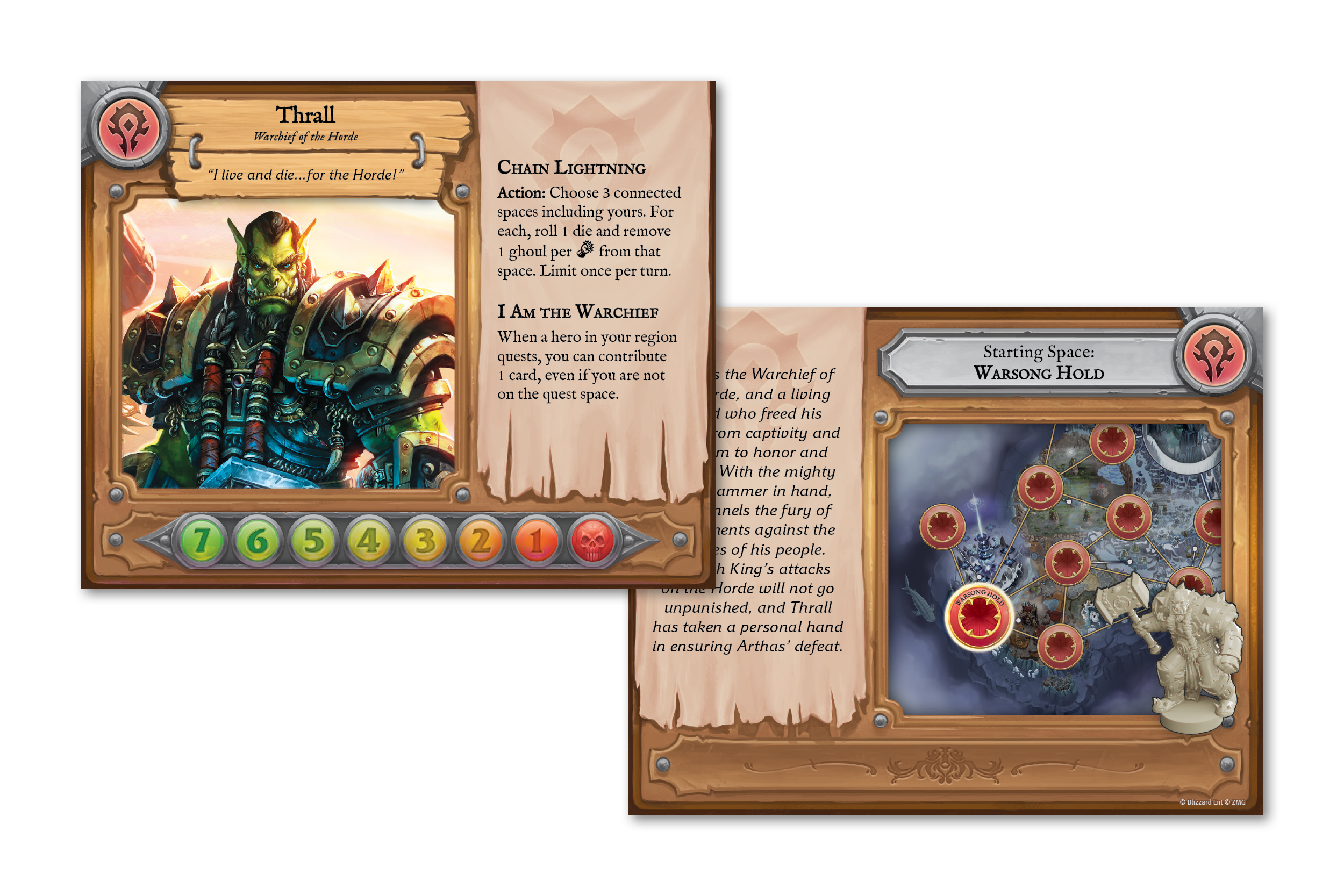 The mighty Warchief of the Horde, Thrall takes the safety of his people and companions very seriously. He lives and he dies for their well-being. With this driving him forward, he channels his fury and connection with the elements into his mission to bring the Lich King to justice.

Thrall is a powerful shaman, and respected Warchief, and his abilities showcase both of these attributes. He can use his Chain Lightning ability to attack a single ghoul in up to three connected spaces, including his own space, rolling one die for each enemy. He can also use his “I Am the Warchief” ability to contribute a card towards completing a quest in his current region, even if he is not on that quest space. This can allow Thrall to keep the spreading Scourge threat under control but still help the other players push the quest along. 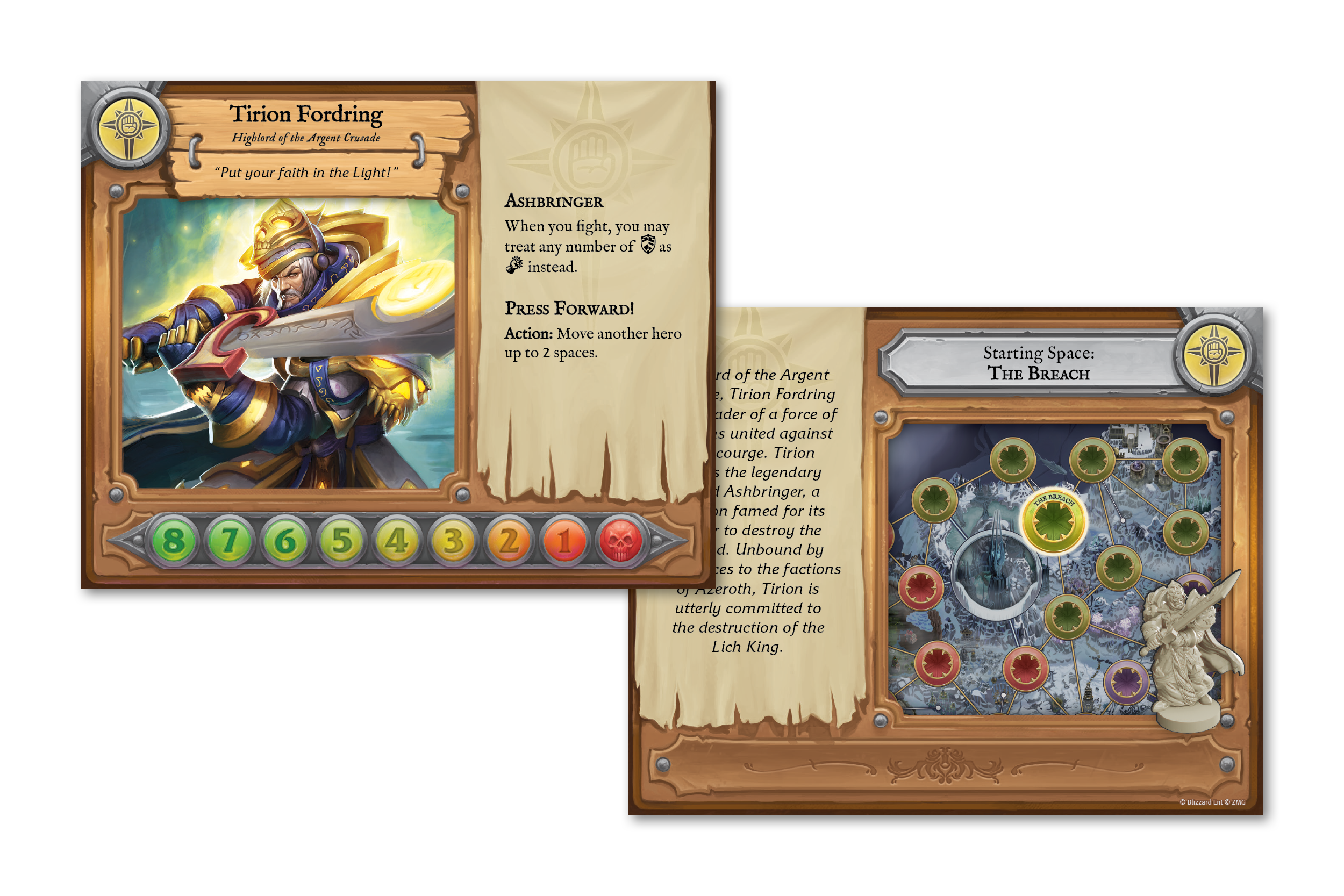 Tirion Fordring, Highlord of the Argent Crusade, wields Ashbringer as a mighty Paladin of the Light against the undead hordes. Owing no allegiance to either the Alliance or the Horde, Tirion’s dedication to the destruction of the Lich King is unrivaled.

His might as a Paladin and as a leader play a large role in his abilities. He can use Ashbringer to turn all shields into successes when rolling dice to fight, giving him extra strength in battle. He can also use his wisdom of leadership to push allies onward with “Press Forward!,” which uses an action to move another hero up to two spaces, helping an ally prepare for their next move or deal with an incoming threat. 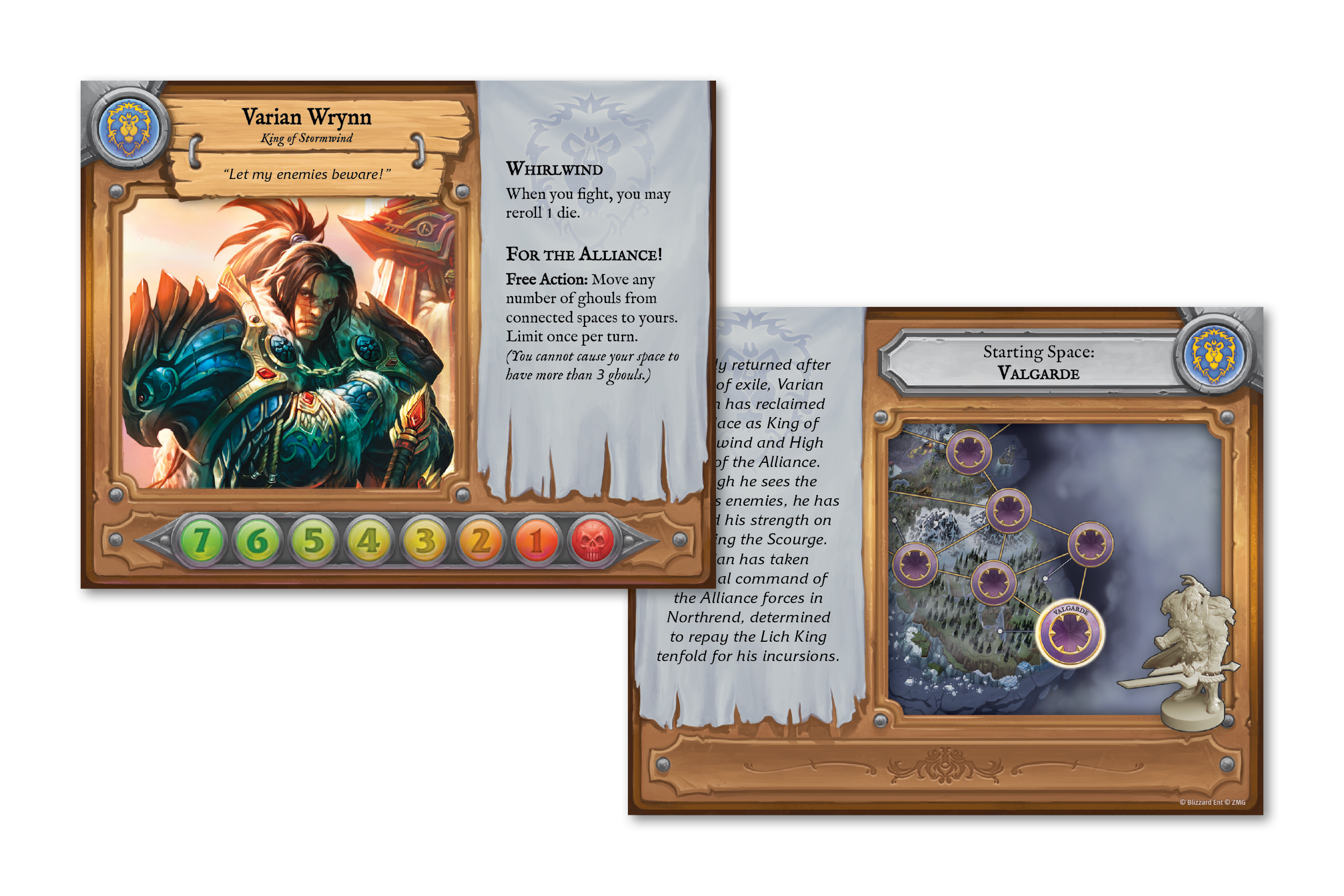 The returned King of Stormwind, Varian Wrynn has taken up the mantle as High King of the Alliance. Focusing his efforts on defeating the Scourge, Varian leads his troops to Northrend in hopes of paying back the Lich King for all the death and destruction he has brought to Azeroth.

Varian’s abilities showcase his strength and prowess in combat. He can use his Whirlwind ability to reroll 1 die when he fights. He can also use “For the Alliance!” as a free action to move any number of ghouls from connected spaces to his space, as long as his space doesn’t exceed 3 ghouls in total.

Who will you choose to combat the evil of the Lich King? Find out by preordering World of Warcraft: Wrath of the Lich King - A Pandemic System Board Game online or from your local game store today!