Stranded on an Unknown World

The frozen, foreign landscape of the planet stretches out before you. An act of sabotage has stranded you and other hostile factions upon the cold world. Your colony ship has been damaged beyond repair and escaping the planet is not an option. To top it off, your crew, still asleep in their cryostasis pods, are scattered.

Can you survive against the other hostile survivors long enough to scavenge the planet, rescue your crew, and find shelter before the sun sinks below the horizon, freezing all left upon the planet’s surface?

Try Cryo on Tabletopia, and order it online or through your local game store today.

Cryo is a worker placement game where 2-4 players compete for resources, build and upgrade vehicles, rescue their crew, and explore the unknown planet, all while attempting to out gather, out maneuver, and out sabotage each other. The game is played in a series of resource gathering phases where each player sends out one of their three drones to gather valuable materials, rescue crew pods, explore further into caverns, and then recall them back to your platform. 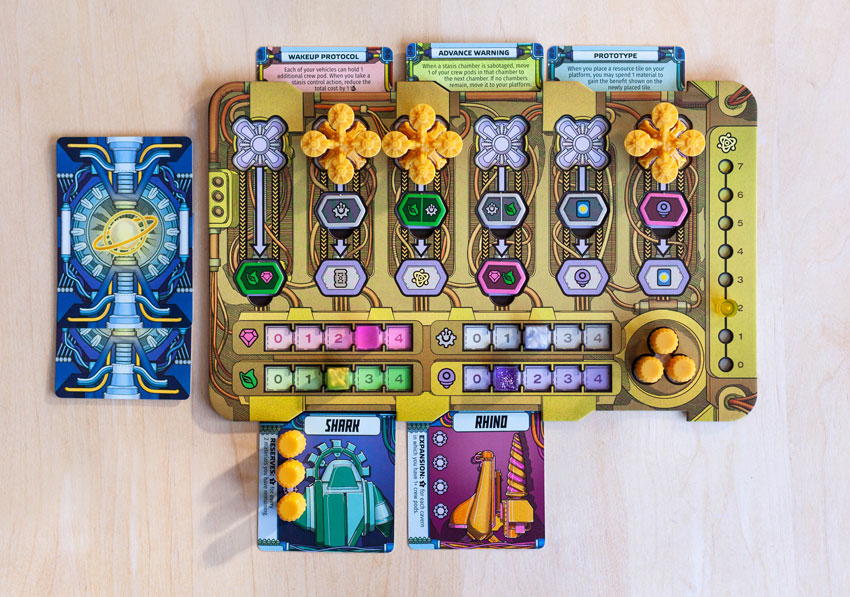 In order to win the game, you’ll need to use the materials and energy at your disposal to rescue your crew pods and build and upgrade vehicles that allow you to explore the deeper caverns of the planet in order to score points at the end of the game. Each player starts with three drones and a set amount of materials and energy, gathering more from the wreckage of their ship as each turn passes and each drone returns.

On your turn, you choose where to send a single drone. There are a multitude of spaces, however, many docking areas will have damage markers placed on them during the set up, limiting where you can land. When a drone does land on a safe space, you’ll be able to do one of the many adjacent actions connected to the docking area. These choices include a variety of ways to salvage materials, and some will grant you the ability to rescue your crew pods or use them for further resource gathering.

However, time is precious. Whenever you recall your drones, time ticks forward, and night spells the end for anyone left on the surface of the planet. Incident tokens are placed upon the areas where the stranded crew pods are found, and recalling your drones triggers one of those tokens to be resolved, granting you the token for end of game scoring. As more and more are resolved, the sun sinks further down, bringing night, and the end of the game, closer.

Also, take care to mind the crew pods still in need of rescue. While many of the incident tokens offer free materials or the ability to draw or play cards, several others are not so helpful. Sabotage incident tokens cause explosions to rock one of the crew pod sections where the incident is resolved, destroying all the pods left in that section. With less crew pods, your exploration options are limited, as is your ability to gain points at the end of the game.

To survive on the harsh world and trek into the deep caverns, you will need to take advantage of the useful and clever technology you have at your disposal in the form of cards. Each card can be played in one of three different ways, offering unique assistance. Upgrades give you special abilities for the rest of the game that can assist in resource gathering and more. For example, the Ram card’s upgrade allows you to place your drones on damaged docks, giving you the benefit of being able to land your drone on any of the several docking spaces. This not only expands your options, but it limits your opponent’s ability to block you from the board.

Missions give you objectives known only to you, offering new ways to score points. The Crab card’s mission grants you more points for each crew pod you have in your largest settlement at the end of the game, while the Ram card’s mission gives you an extra point for each incident token you’ve collected.

Vehicles offer you the ability to transport a number of crew pods into the caverns, which will grant you more points. Different vehicles offer a different number of spaces available. The Ram card offers you 3 spaces for your crew pods to take into the caverns, where the Crab card offers 4. This is where deciding which cards to use as vehicles, as missions, or as upgrades comes into play.

Among the wreckage as you gather, build, and upgrade, you will experience lucky breaks and damaging setbacks. You may stumble upon some extra materials after resolving an incident; or, another hostile faction may destroy a number of your crew pods. Thinking ahead and finding out how your materials and equipment benefit you best will be your saving grace.

Can you survive the harsh world long enough to save your crew, or will you succumb to the cold when the sun sets? Try the game on Tabletopia, and order Cryo wherever board games are sold!