Announcing World of Warcraft®: Wrath of the Lich King - A Pandemic System Board Game

A cooperative adventure set in the land of Azeroth

The Lich King’s grasp has stretched far beyond his throne in the dreaded Icecrown Citadel. He must be stopped, and the scourge that is his army of undead abominations must be eradicated. Azeroth has united and its heroes have gathered, ready to lay siege to the Lich King’s abode. Can you and your friends survive the undead hordes long enough to confront him and bring an end to his villainy?

Order World of Warcraft®: Wrath of the Lich King - A Pandemic System Board Game online or from your local game store today!

The Scourge of the Lich King

Journey to Northrend, the cold and unforgiving northern continent of Azeroth, where heroes utilize familiar mechanics of the Pandemic series, but with fantastical tweaks, to truly bring a unique experience with World of Warcraft®: Wrath of the Lich King - A Pandemic System Board Game. 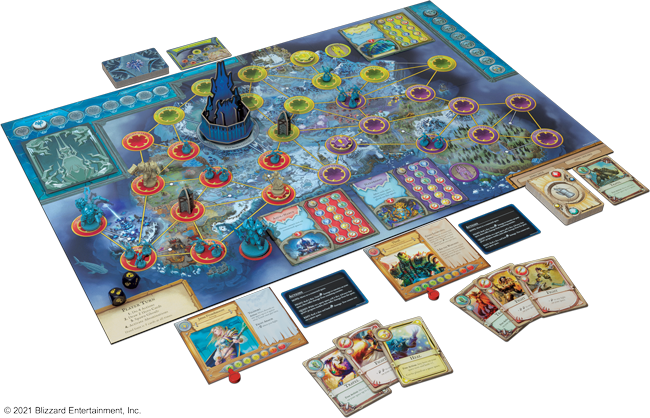 Forts, temples, battlegrounds, and more populate the extra-large game board as heroes journey across the cold landscape, working together as they make their way to iconic locations to deal with the rising threat of the Lich King’s ghouls. These minions attack players, hindering their progress toward ridding the world of their master. Too many ghouls spawning in a single area summons powerful and aggressive abominations, horrid undead beasts twisted by the Lich King’s power that will seek out the nearest hero and engage them.

Keeping the undead plague at bay will be a challenge for players. Heroes must engage the ghouls and abominations in combat by moving into the spaces they occupy and rolling the combat dice, attempting to roll enough damage to destroy them. These rolls can be combined with Hero Cards to give attacks a boost, and offer other useful strategies. 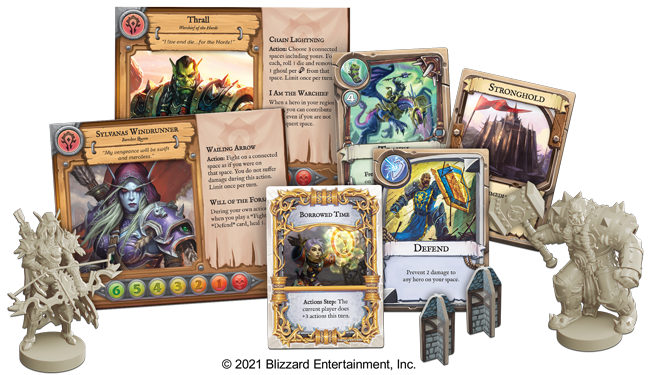 In World of Warcraft: Wrath of the Lich King - A Pandemic System Board Game, to combat foes, players take control of one of many heroes from the world of Azeroth. Become legendary characters such as Thrall, Warchief of the Horde; Varian Wrynn, King of Stormwind; Sylvanas Windrunner, Banshee Queen of the Forsaken; and many others, all with their own unique abilities. Each of the heroes is represented with their own detailed and sculpted plastic figure, bringing even more authenticity to this World of Warcraft adventure.

To stand a chance against the scores of undead, players collect Hero Cards to gain an edge against enemies and get closer to the goal. These cards come in the form of equipment cards for more attack power during combat, special mounts that allow players to move more spaces on your turn, healing potions to restore your hit points, and much more. While players cannot trade cards with others, they can be used to assist when completing quests to progress quicker.

It will take more than simply trekking across the tundra of Northrend, mowing down the masses of ghouls and abominations. The Lich King has brought all manner of dark magic and terrible creatures under his control that players will need to face. These come in the form of quests, a brand-new mechanic that sees players adventuring across the frozen continent to battle monstrous entities, destroy evil relics, and more to win the game. 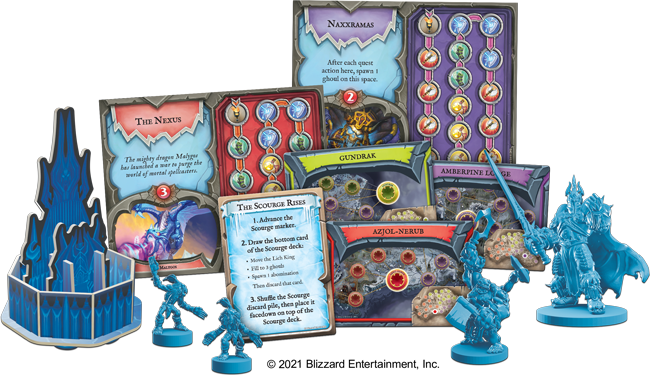 These dangerous quests can be completed as a team through a combination of rolling dice and utilizing the hero cards. However, each quest comes with its own dangers, ensuring those who attempt them will not escape unscathed. As players complete quests, they move closer and closer to the final assault on Icecrown Citadel, where the Lich King himself resides.

Can you save Azeroth from the Lich King or will Frostmourne claim yet another soul? This exciting new Pandemic System game will release late 2021. Order your copy of World of Warcraft: Wrath of the Lich King - A Pandemic System Board Game on our webstore, from your local game store, or from a Target near you!