Released in 2000, Citadels quickly became one of the most beloved card games of the generation. It’s strategic gameplay that relies heavily on both bluffing and intuition shines most prominently in the multitude of character cards and their varied abilities. Which characters you choose will greatly shape your path to the title of Master Builder.

The Name of the Game

In the game of Citadels, cunning subterfuge and intuition are key. Only one among you and your fellow players can attain the title of Master Builder. To achieve this, you’ll need to build the grandest city of all, placing districts strategically in order to score the most points at the end of the game. Districts vary in type and how they can contribute to your city, but the first, and possibly most important thing you’ll do, is choose your character. 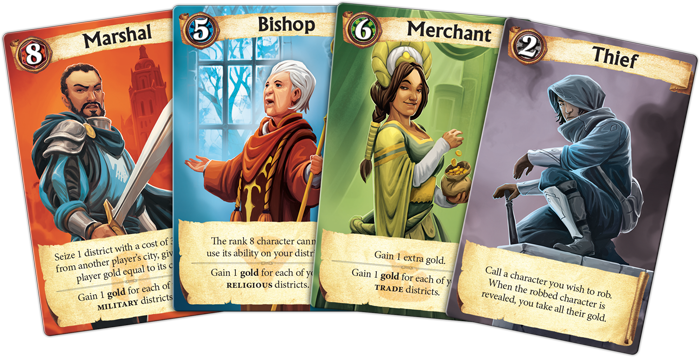 Citadels is played in a series of rounds. At the top of each one, players draft character cards that they feel will provide the desired special abilities to further develop their cities—or hinder their opponents' efforts. This is done in secret, allowing players to bluff and put their deduction skills to the test against their fellow builders. Each of the 27 character cards vary greatly in what their unique abilities do, so choosing the one that fits your tactics will serve you best. Some can bag you more gold determined by your districts, some will simply allow you to steal from other players, and others allow you varying levels of sabotage that you may rain down upon your rivals.

Once characters are chosen for the round, players can build districts in their city by playing district cards, add to their gold supply for future city building by taking gold from the bank, and use their character’s special ability to help further their agenda. Plot, scheme, and deceive your way to the top as you attempt to predict your opponents’ actions and foil their plans.

Citadels sports 27 character cards for players to choose from at the top of every round. Each character has their own unique ability that can help further your march towards becoming the Master Builder by assisting you in building your city, hindering the other players, or both. Each character is ranked 1 to 9 , which determines when they take their turn in the current round. For many characters, timing is crucial when using their abilities, so gauging an ability versus  the character’s rank  in the round is important.

Your player count will determine whether you choose from 8 or 9 characters each round. With such a wide variety of characters, you may feel a bit overwhelmed. Fear not, as Citadels has several preset scenarios that players can utilize when choosing which characters are present for the game. They are themed, such as “Devious Dignitaries” or “Vicious Nobles,” allowing players to choose from a specific, yet still varied, group of characters.

As mentioned, each character card presents a unique ability that can range from bagging you more gold, trading cards with another player, destroying another player’s district, and much more. Take the Thief, for example, a fan favorite if there ever was one. If you chose this cunning individual as your character for the round, then you have the ability to call out the name of another character. When that character’s turn comes, you immediately take all of their gold. Talk about getting your pocket picked.

Maybe thievery isn’t your tactic, and you prefer an approach that plays more into the long game. Then, maybe, you pick the Merchant. If so, then on your turn, you choose to either gain an extra gold no matter what resource you decided to gather this round, or you gain a gold for each Trade district in your city.

There are a myriad of other abilities from the collection of colorful characters. The Architect allows you to draw more district cards and build more districts, speeding up your city building process. The Warlord gains gold from each Military district in your city, and can destroy other player’s districts. The Magician allows you to either trade cards with someone, or discard cards from your hand to draw more. The Assassin outright forces another player to skip their turn, severely hindering their ability to build and acquire funds. And that is just the tip of the steeple.

With so many characters to choose from, Citadels ensures an entertaining, unique experience with every round of play. Once you find yourself comfortable with the gameplay, you can even create your own mixture of 8 to 9 characters. With so many at your fingertips, the possibilities are endless.

Can you become the Master Builder? Find out by pre-ordering Citadels online or from your local game store today.