Fully Equipped to Take on the Scourge

Take advantage of essential items and abilities with Hero Cards

The heroes of Azeroth are mighty. However, the Lich King and his undead minions are not to be underestimated. Luckily, World of Warcraft®: Wrath of the Lich King® - A Pandemic System Board Game gives players all they need to fight back with Hero Cards.

Just like in World of Warcraft®, players are going to need the proper equipment in order to survive. A reliable weapon, a strong shield, a powerful healing potion, and a fast mount are all important things to have at the ready when the legions of undead are near. These are all available in the form of Hero Cards. The different types of cards are Fight, Defend, Heal, Travel, and the special Stronghold. Each one assists in different ways to help give players a much needed advantage.

On top of that, if players find themselves without the proper cards for certain situations, allies on the same space can assist by offering up their own Hero Cards. While players cannot trade cards among one another, they can play cards from their hand to assist fellow heroes. This new dynamic cardplay encourages players to use the cards to augment their actions, creating new strategies of play.

Players will need all the strength they can muster to keep cutting down the endless hordes of ghouls and abominations. When a player takes a Fight action on their space, they roll the dice and see how much damage they can deal to all enemies occupying the space with them. Sometimes, players may need a little extra punch, however. After rolling the dice, any hero occupying that space can play any number of Fight cards. Each Fight card adds either a +1 or +2 to their attack, shown by the number on the card. 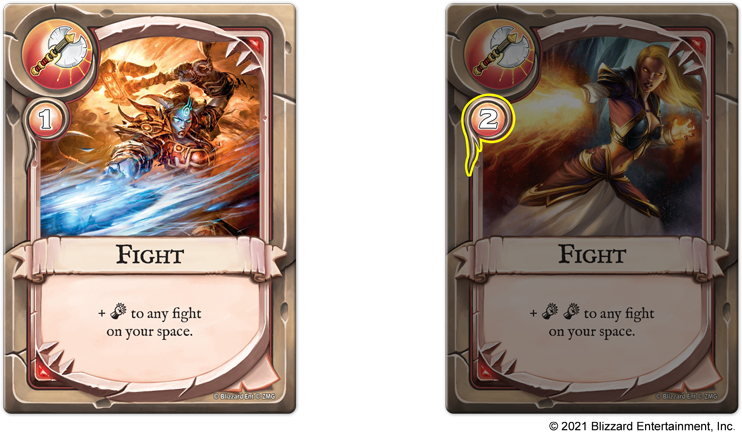 Combat isn’t all about swinging your weapon. Defend cards can help keep players safe from incoming damage. Each hero has a set amount of health that decreases when they take damage. When engaged in a fight, any enemies that are not defeated deal damage to the one who attacked them. Players can also take damage when an abomination enters their space, when they attempt to complete a Quest, or when they engage in the Fight action in the same region as the Lich King. No matter the source, a player can play any number of Defend cards to prevent up to 2 damage per card.

What’s a good fantasy adventure without a few health potions? Sometimes damage is inevitable. Luckily, Heal cards are designed for just the times when players need a pick-me-up. As a free action, a Heal card can be played to allow any hero on the same space to take a free Rest action, healing 1 additional damage. Even better, this bypasses the normal restriction and allows players to rest on a quest space. 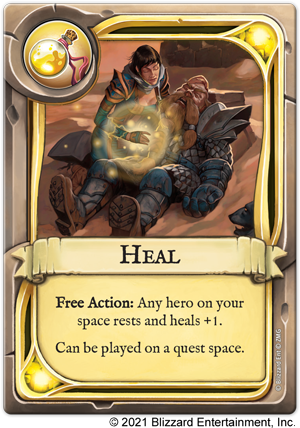 It wouldn’t be World of Warcraft without a good mount. Sometimes strategy is all about getting somewhere quickly. If players need to cover more ground, they can play a Travel card as a free action to move any player in the same space up to 2 or 4 spaces, shown by the number on the card. As a free action, they can be used for easier strategic placement of heroes since they don’t require the use of an action. 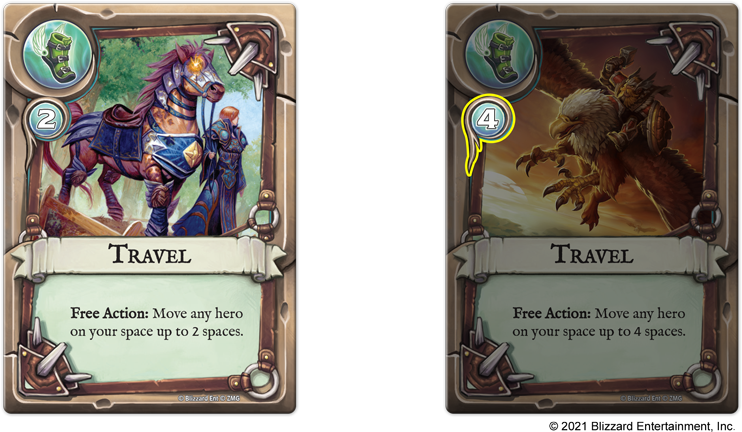 Though drawn from the Hero deck, Stronghold cards are not added to your hand. Instead, the card is placed on a space of the players’ choice, immediately. That space becomes a Stronghold, which is a space that allows heroes to move to it, directly, as well as heal more damage when resting. 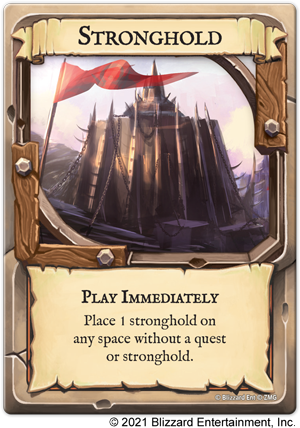 Strongholds offer players even more strategic advantages. When one is placed, players can use a new action: Flight Path. This option allows heroes to move directly to a space with a Stronghold, allowing them to cover a lot of ground as they move across Northrend to deal with threats.

The second effect of a Stronghold is that it allows 1 additional damage to be healed when players rest on that space. As the board becomes more and more overrun with undead, a place to heal up even more than usual is a welcome advantage.

With such items at your disposal, can you and your fellow heroes fight across Northrend and end the evil of the Lich King? Find out by ordering World of Warcraft®: Wrath of the Lich King® - A Pandemic System Board Game online, or through your local game store.