Construct districts to build the grandest city of all

Citadels is the beloved card game where you compete against your friends to build the greatest city. To do so, you need to choose which districts to construct within your walls. There are a variety to choose from, and they will be the building blocks for your winning strategy.

The title of Master Builder is the pinnacle of achievement in the world of Citadels. It proves that you are the maker of the most impressive city in the kingdom. Each round, after choosing your character and gathering some resources, you can choose to play cards that represent districts in your city.

Within Citadels, there are 84 district cards, most of which fall under one of four categories. These are Noble, Religious, Trade, and Military. The four types will often correspond to specific abilities from specific characters, like the Merchant earning more gold for each Trade district, or the Bishop gaining the same for Religious districts. Learning which districts to play at what time, and which ones work with specific characters are key aspects of succeeding at Citadels.

The fifth type of district card, Unique districts, come with special effects that you can use to your advantage. The effects vary from gaining you more resources such as gold or cards, to extra points at the end of the game. For example, if you place the School of Magic district card, it works in tandem with certain character abilities. It counts as a district type of your choice for abilities that gain resources for your districts. The Observatory allows you to draw more cards on your turn if you choose to do that instead of acquiring gold. On the simpler side of Unique districts, the Dragon Gate earns you two extra points at the end of the game, which could be the two points that pushes you to the front. There are many more, each with a special effect that could come in handy when you need it. 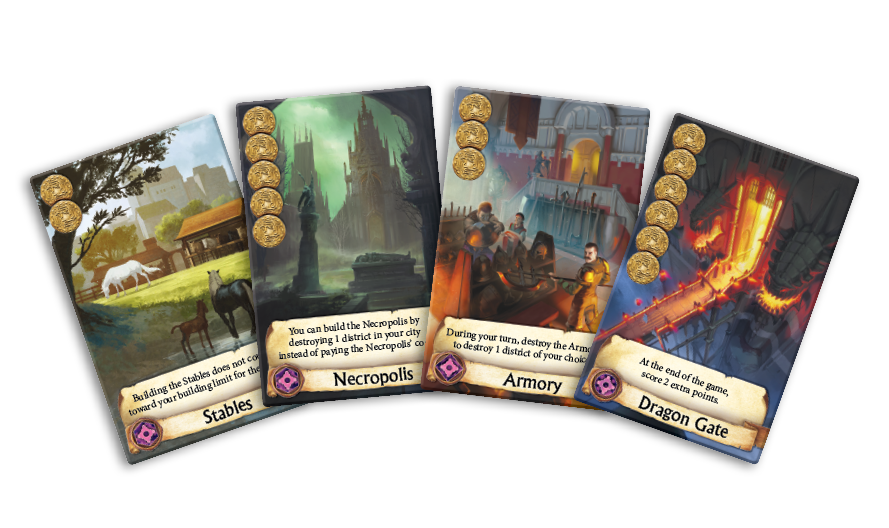 In Citadels, it isn’t just about building the biggest city, though that is a factor. It’s about building the best city. Throughout the game, you’ll construct your districts and use whichever characters best fit with your overall strategy. When one of the players builds their seventh district, the game ends once that round concludes. In the end, you are scored on several different areas.

The builder with the most points at the end is the master builder. In order to claim that title, you’ll need the perfect mix of gold, diversity, speed, and no small amount of cleverness to outfox the other players fighting for the same goal.

In addition to the unique districts found in your copy of Citadels, Hobby Next is offering up 14 brand new ones at participating local hobby stores.

Asmodee’s Hobby Next program is designed to help local hobby stores and give gamers exciting new promotions. With new releases come new opportunities for stores to participate and draw more customers, as well as give players a chance to get their hands on some exclusive content. With the release of this new version of Citadels, we have the exciting opportunity to participate in the Hobby Next program. Customers can check with their local retailers about the promotional cards, and retailers can inquire with their distributor about the Hobby Next program to ensure your store isn’t left out. Find participating locations by clicking here.

Will you be crowned the master builder? Find out by pre ordering Citadels online or at your local game shop today!